So my keyboard at work just broke.  Doesn't happen often, but one of the keys just stopped y'know... putting it's letter on the screen.

So I got given a replacement from somewhere.

Here's the thing - the layout is different.  Any programmer or techie or otherwise-nerd will know what I mean when I say that it's FREAKING ANNOYING!!

Now, there aren't any big changes really.  I mean, all the letters are in the same place, and the F-keys are still above the keyboard and the number pad is the same, but there are enough differences to frustrate someone like me.

The Home-End-PgUp-PgDown-etc. chunk of keys is different.

This is what I used to have: 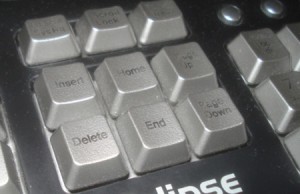 Here's what I have now:

What that means is that I keep hitting Delete instead of End.  Because it's right below Home now.

I only have one Windows key

And it's on the left - the one I don't go for when I'm locking my computer with Win-L as I stand up to go somewhere.

The F-keys are grouped in threes

Seriously, in threes?  F5 is by far the most common F-key I hit, and now it's in the middle of a cluster instead of on the left.  I have to look at my keyboard now to hit it.

Not a big deal you'd think?  Well truthfully it doesn't affect me much - I still usually hit it first go, but it's been moved left to make way for the arrow keys.  So when I don't hit Ctrl, I hit the left arrow key.  That's confusing.

So you're probably thinking, "Oh, you poor little baby! Would you like some cries with your waa-burger?"  And yes, yes I would.

Seriously, it's frustrating.  I know it's only temporary - I'll get a new one soon with a normal key layout.  But my keyboard is by far the most frequently-used tool in my arsenal.  Small things like this slow me down.

Ok, I'm finished complaining now.  You can proceed with your day.

iPhone and the small things

So I finally joined the dark side and I got myself an iPhone. Now, if you've been following this…

I'm positive I've ranted about maintaining legacy code before, but I going to do it again.  At least this…