In case you missed yesterday’s post, I’m in New Delhi at the moment with Adam Cogan and Adam Stephensen helping out with a Professional Scrum Developer course. 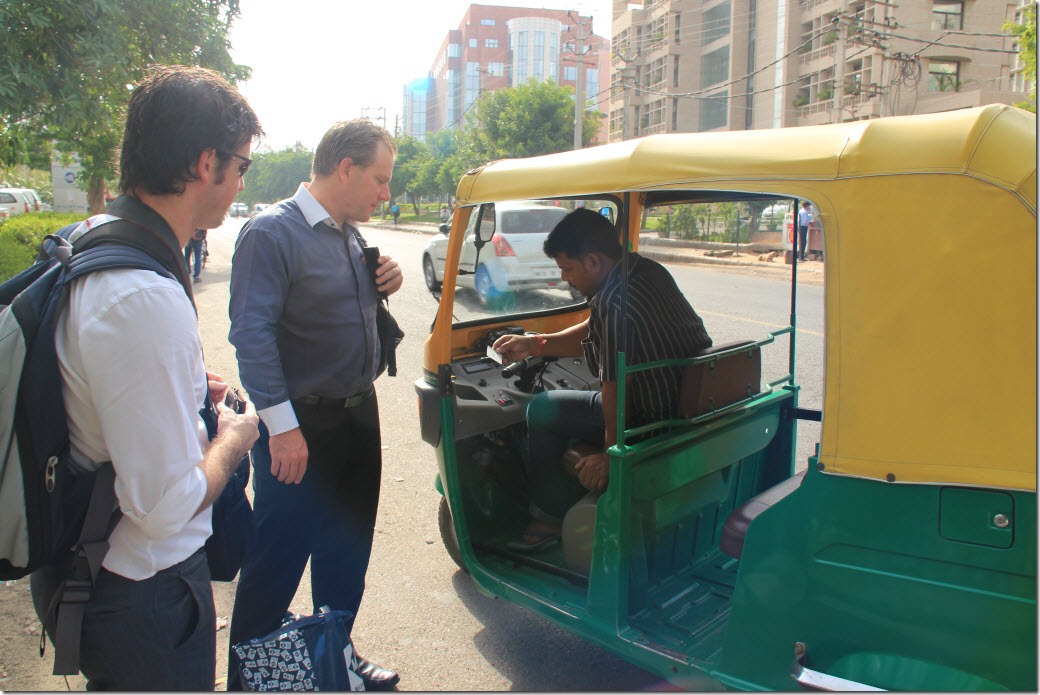 Day 2 started a lot smoother than Day 1 because we now knew the way to the venue.

Bonus 1: Today, we made it to the training venue in only 3 minutes vs. 1.5 hours yesterday. Talk about continuous improvement!

Today’s agenda saw a lot more interaction with the lovely Team Foundation Server (TFS).  It was time to see Scrum in action with the Microsoft tools.

Impediment 1: We were expecting a room full of cables to a switch, but unfortunately the training venue only had wireless.  There was no way for students to connect!  Matthew Hodgkins spent some time setting up laptop for us to bring along to the course.  It was set up with domain server and a TFS Virtual Machine ready for all the students to connect to.  With a lot of help from Matthew and Parmod Kumar (one of the Sysadmins working with the students), we got the server reconfigured so everyone could connect.

Adam Cogan started the day by cracking open TFS and walking through the work item world: Adam C professed his love for Story Overview reports and also Priyanka Chopra – in his opinion the most beautiful girl in India.  He also spoke about his “tough” guts and what a “handbreak” Adam S and I were for not eating street food with him.

He let the teams have a quick break while he introduced them an awesome tool called Debugger Canvas.

Then it was on to TFS integration with Microsoft Excel and Project 2010, TeamCompanion, and UrbanTurtle.

Adam C introduced the first sprint of the day by telling everyone that there was a new Product Owner. He talked about all the things this new PO might want, so they would be well prepared when he arrived. 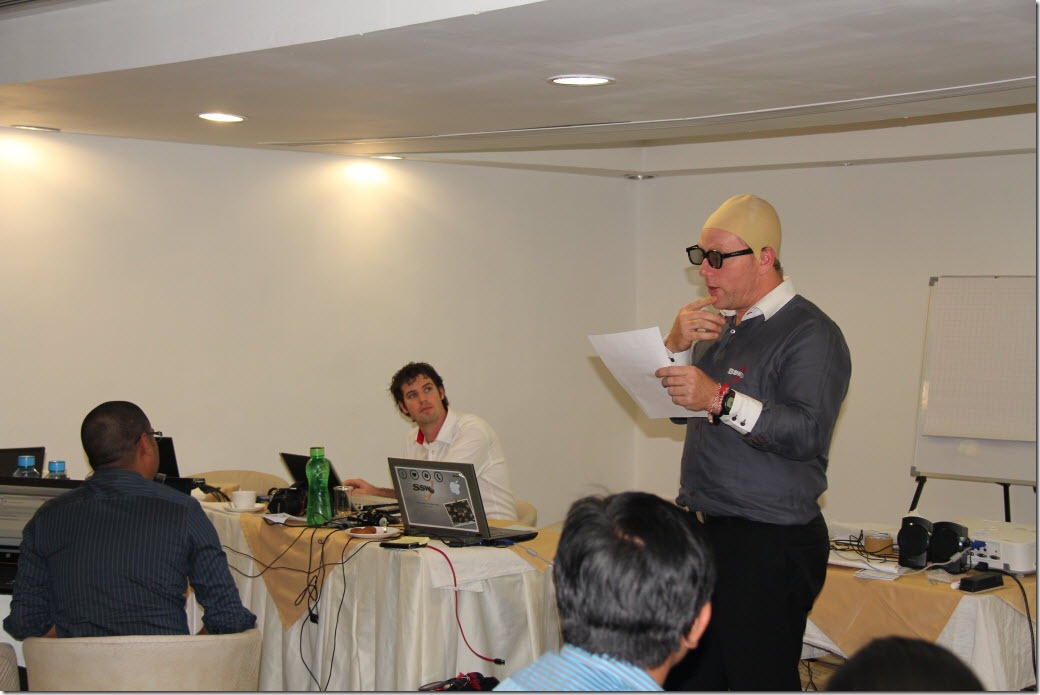 This new Product Owner was a bit odd.  He talked about his new wife, the new Tailspin website he purchased, and the Chinese developers he had sacked.  He told them about the bugs some people had told him about, and asked them to: 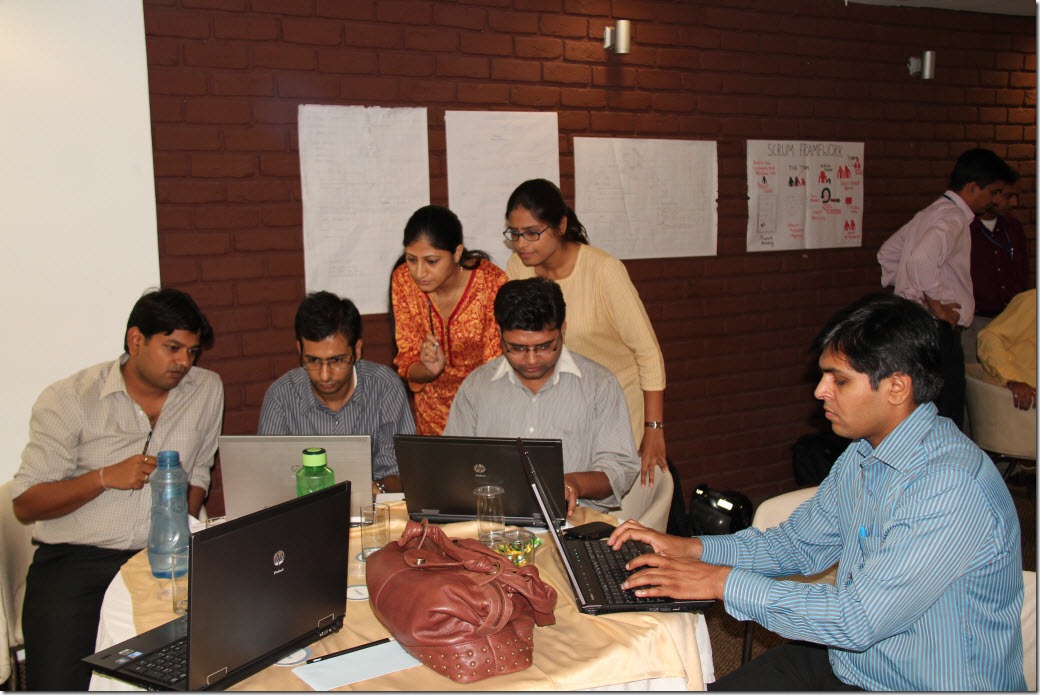 The students had been given so much new information that morning, we were interested to know what they actually “heard”.

All of the teams did OK considering this was their very first technical presentation.  We all know the human brain starts working when you’re born, and doesn't stop until you stand up to speak in public.

Interestingly, they were very keen to show the Product Owner all of the work items they had created.  They had a very different idea of what they had to do.

There were a few impediments this time, however.  The teams found that they needed to install TFS Powertools in order to add the Check-in Policies.  Due to frequent power outages (apparently rampant in summer), this seemed to cause a lot of problems.  “Team Masters" had even added an impediment to TFS saying that TFS was down and was blocking them!  The Product Owner looked at them very incredulously.

“Team Scrumsters” actually fired up the new application and showed it working.  They were the only team that got the Product Owner jumping up and down with excitement. 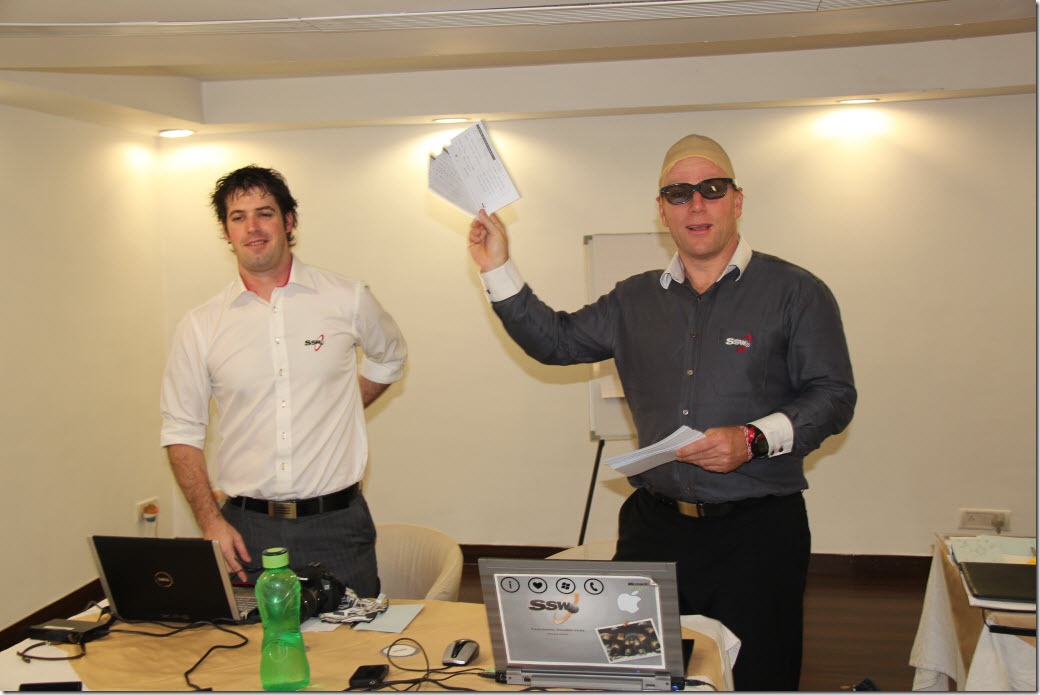 Before the Product Owner left, he played a video to introduce the students to some of his “American culture”. He played a Charlie Sheen video and talked about the importance of “winning”.

The big lesson that came out of the acceptance criteria was that the teams didn’t clearly understand what the Product Owner wanted.  Every team had a very different idea of what was required:

What Team A heard:

Once again, lunch was delicious.  Adam Stephensen asked heaps of questions about the selection of traditional Indian foods, the answers being fascinating.  He’s on track to come home with some new recipes! 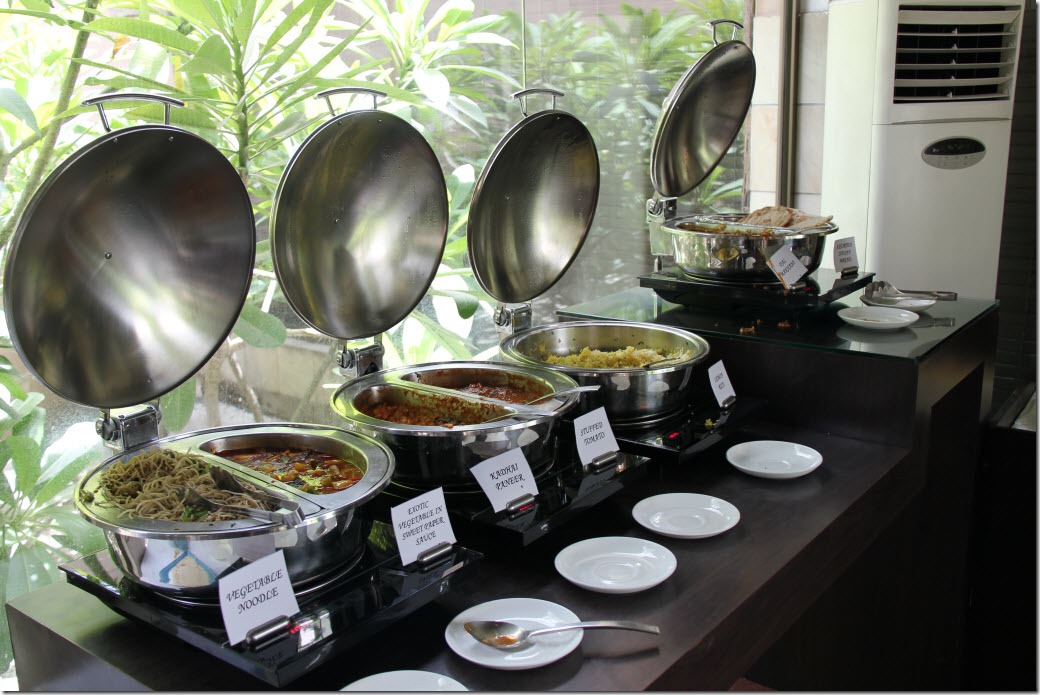 After lunch, Adam C treated the group to some Australian culture in the form of an ad for Fosters.  He followed this up with a (remarkably similar) Canadian Molson video and was disappointed when the group preferred the Canadian version!

During lunch, Pradeep requested they see how the Aussies do their planning and standup meetings.

Adam C asked Adam S and I to stand up in front of the class and start work on a new sprint.

Bonus 2: This ended up being quite worthwhile.  Some of the students said it was the highlight as they got to see how it was “meant” to be done.

Adam C played the students a Karate Kid video to highlight the point that following the Scrum process is like developing muscle memory. If you follow the process, it starts to become second nature and you reap the benefits.

Sprint 2 saw the teams get deeper into the solution.  They were asked to enter some more Product Backlog Items and make sure each person raised a bug. 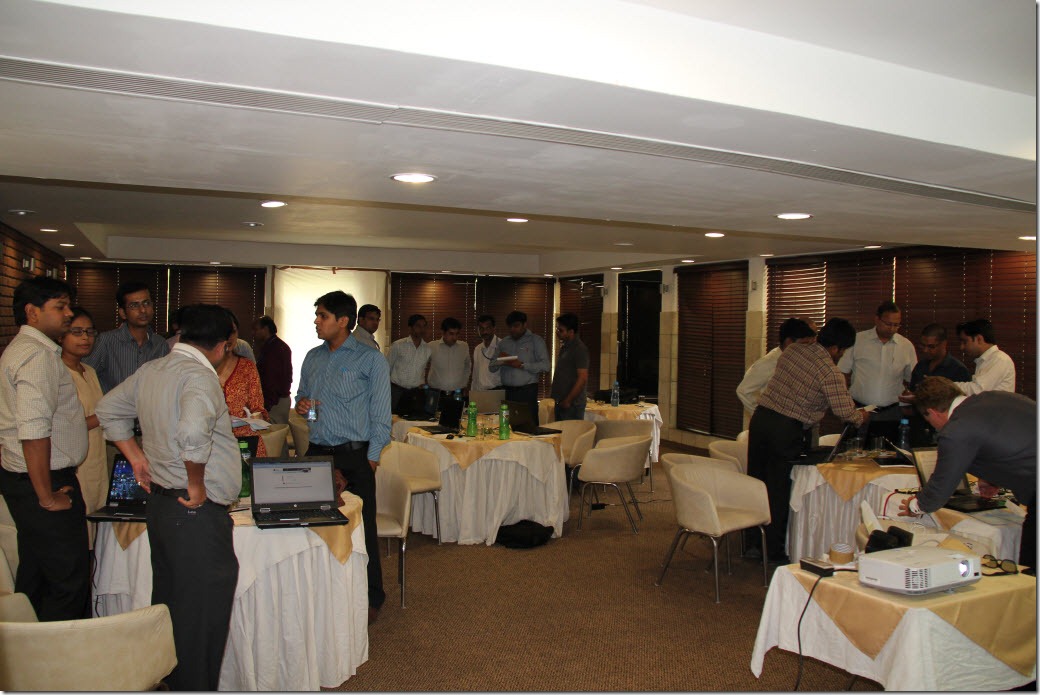 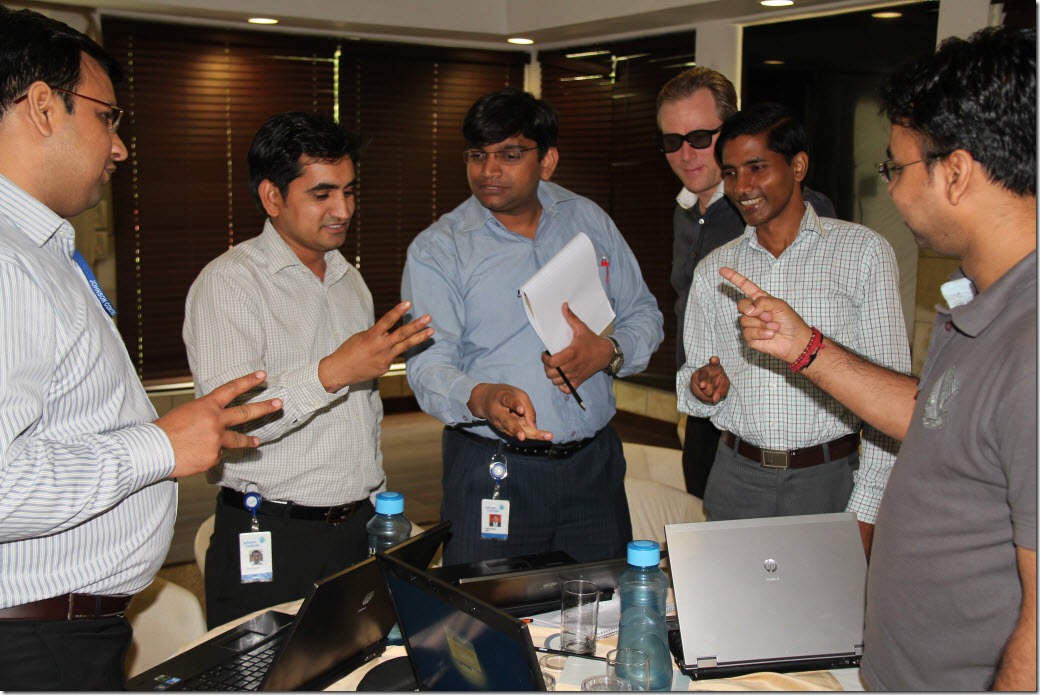 Bonus 3: This sprint, every one of the teams did a standup and one team implemented the “fist” estimation technique.

The Review and Retrospective meetings were are lot more impressive this time.  All teams did a great job with their presentation and the Scrum process was finally in action in all its glory.

To close off the day, Adam C played a video showing how Emperor penguins work as a team for survival in Antarctica.  He emphasised the importance on the team in the Scrum framework.  If everyone is prepared to give their bit for the team, it will benefit everyone. 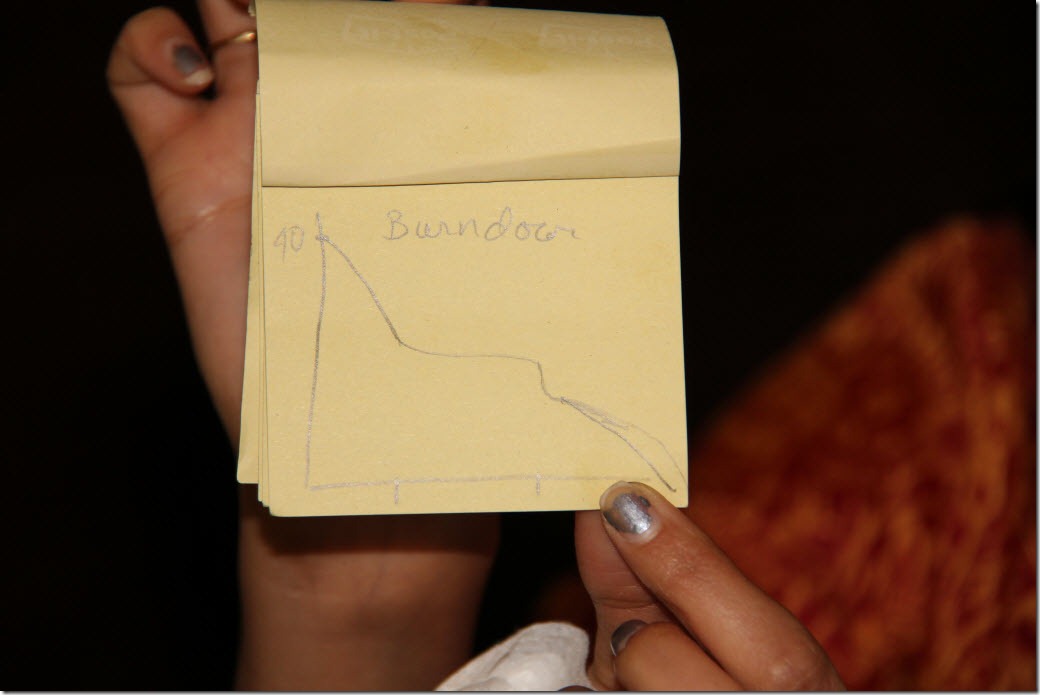 There was a lot of great feedback from the students on how the day went.  Some of the many highlights the group mentioned were:

The Rise of Participative Software