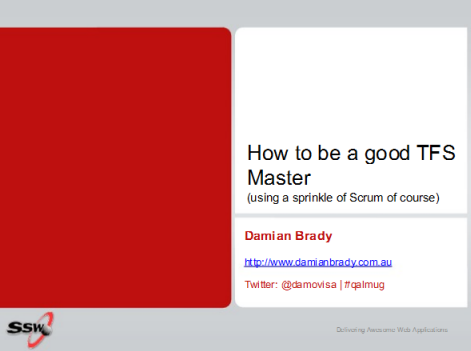 I recently gave a talk at the Qld ALM User Group on the topic of "How to be a good TFS Master".

Hopefully those who turned up got some great tips on how to use TFS more fully, but the main points I hoped people left with were:

In our experience, the majority of companies using TFS are using it for source control only.  SSW helps teams get closer to using 80 or 90% of TFS where the real advantages can be felt. There are some fairly significant infrastructure costs associated with getting to 100%, and we find most organisations don't want to go that far.

TFS is much more than source control

In fact, if you're using TFS purely for source control, you're doing it wrong! You might even be better off using Git or Mercurial.  The best option (of course) is to start using TFS more fully to help you get the best out of your team.

TFS has some awesome capabilities that allow you to manage and support your entire scrum process. The integration story is compelling; allowing you to tie code changes directly to user stories, produce genuinely useful reports for your managers, and enforce your policies and coding standards allowing you to tick items off your Definition of Done without any effort.

For more information or some reminders of what I spoke about, have a look at the slides on Slideshare - http://www.slideshare.net/damovisa/how-to-be-a-good-tfs-master

Horses for Courses (and Jockeys)

I've stumbled across a few blog posts lately that talk about why everyone should use one technology over another,…

Update: "Down the track" has arrived, and I now have an extension to this post that shows a single…