Yesterday, I visited a Telstra store to pick up a shiny new Nokia Lumia 800. After the OS on my trusty HTC Desire once again catastrophically failed, causing me to wipe it and reflash, it was time for a change.

In the past, I've had several Nokia phones running Symbian, a Sony Ericsson or two, one iPhone 3G, and most recently my Android running Froyo then Gingerbread. I've never had a Windows phone, and I've heard great things about Windows Phone 7.5, so I thought it was time to give it a try.

I've had the phone for about 24 hours now, and my impressions have been good for the most part. There are some incredibly impressive aspects to the phone and OS, but there are also a couple of fairly significant flaws with the blame shared between Nokia, Microsoft, and Telstra.

My first impression upon opening the box was, "This is a very good looking phone."  It's sleek and black and feels incredibly well put-together.  Of particular note is the "Clear Black" AMOLED screen.  When on, the blacks are so impressively black that it's impossible to tell where the screen ends and the black surround starts.  It really helps bind the OS and the device together. Rather than feeling like a hand-held display with software on it, it feels like an integrated device. 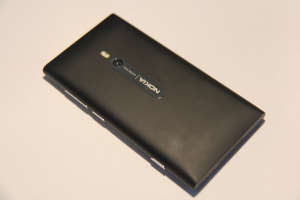 The speed of the device is a welcome change as well.  My HTC Desire took minutes from power-button-push to a usable phone; the Lumia takes less than 25 seconds.  Screen transitions and apps are very responsive and there's no perceivable lag with touches or swipes.  Network connectivity seemed faster as well (even on the same network as the Android), probably due to some combination of the operating system and the hardware.  By the time I walked the device out of the store, I'd already connected the phone to my Google, Facebook, and Twitter accounts, and all my contacts were on the phone.  I had big issues connecting to my work's Exchange server, but more on that later.

I was initially skeptical of the integrated "People" function on the phone that combines a contact's details into a single "Person" complete with their Facebook, Twitter, and other accounts.  I had a similar function on my Android and I found it useful, but a bit clunky to operate.

Impressively, the phone identified and correctly linked about 90% of the contacts I had from Google, Facebook, and Twitter.  Almost all contacts had automatically been merged and the decisions around what were the primary details were very sensible.  Each person had an up-to-date profile picture from Facebook as well as all their contact details. In all cases, the correct name was shown (no "John Smith1" or "johnsmith").  Linking the few contacts that weren't automatically merged was extremely fast. By the time I'd done three, I was taking less than 5 seconds to join two contacts together.  This short learning-curve was something that was visible throughout the first 24 hours and reflects very well on the WP7 operating system.

GPS location was impressively fast.  I had been used to a minimum 10 second delay on my android, but the Lumia found me on Bing Maps in a fraction of that time.

I was also particularly impressed when I bought an app from the marketplace.  After agreeing to purchase, a message popped up telling me it'd be on my Telstra bill.  This is hands down the most convenient way to purchase an app. No need for another party to be involved when I'm purchasing things for my phone.

Exchange.  This one baffles me.  I simply could not connect to our workplace Exchange Server (2010 SP1).  Not for lack of trying, either.  I scoured the web for solutions, spoke at length to our SysAdmins, and installed certificates left, right, and centre.  All to no avail.  I've never had this problem in the past; my Android spoke to Exchange like they were best buddies.  I find it inexplicable that Microsoft made the only device that can't talk to our Microsoft mail server.  It's a ridiculous situation.

Before you put pen to paper, yes, if you have a Windows Phone 7 (including the Lumia 800), there's a good chance you have successfully connected to your Exchange server.  I have heard a number of people say they had no problem.  It seems hosted Exchange servers (e.g. Office 365) work fine, and there are workarounds for self-signed certificates.  Our server, however, uses a certificate from a CA (which should be trusted out of the box) and the phone just doesn't seem to like that.  I'll keep searching for a solution, but for the moment I'm assuming I just won't be able to sync with my Exchange account.

Data on the phone has caused me some consternation as well.  While the speeds seem fine, the phone only reports 3G as its maximum network speed.  My Android happily showed an "H" symbol about 90% of the time at home, so I know I'm in an area with HSDPA service, but the Lumia refuses to recognise that it can run anything but 3G or Edge.  I've been passed between Telstra and Nokia support quite a few times at this point and nobody can give me an answer.  The phone is definitely the correct variant for Telstra, and the Lumia is capable of showing an "H", so HSDPA speeds should be possible.

Tethering, while it has been supported by WP 7.5 for some time, has not been enabled on this phone.  Telstra offers nothing but a, "sorry, maybe soon" and no indication of an ETA.  This is a big deal for me. When travelling, my phone is my primary Internet device.  I've never bothered with a USB mobile device before and I don't want to start now.  Telstra have other Windows phones that support tethering, so there's obviously no technical reason it has to be disabled. They need to sort this out quickly. 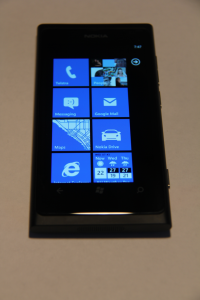 The Too Early to Tell

The UI is something I'm still getting used to, but I don't think it'll take long before it's natural.  As I mentioned, the learning curve for performing operations seems short and the OS is consistent throughout.  It's already growing on me.

I haven't installed too many apps at this point, but the ones I have installed seem pretty good.  In particular, AU Weather Pro and AFL Season 2012 are fantastic apps.  I haven't had the opportunity to use Nokia Drive yet, but I'm looking forward to it.

The pre-installed Foxtel Guide app required an update before it would show me any information, and I had to actively search for that update.  I assume other apps will let me know when there is a new version, but it was a bit off-putting.

The battery life seems OK.  It was at about 25% when I unboxed it, so I kept it on charge for most of the day.  At 5pm it was at about 80% and by 10pm it was giving me low battery warnings which seems like a bad sign until you consider I was playing with it almost non-stop.  It'll be interesting to see how it performs when I lapse into normal use.

In short, it's a great phone.  It's beautiful, fast, and has many impressive features.  Nokia has a fantastic device here, and Microsoft has obviously put a lot of thought and good engineering into WP7.

However the combination of no Exchange and no Tethering is very disappointing.  To be honest, if I'd known about these two issues before I got the phone, I probably would have waited.  Either for them to be resolved, or even for the Lumia 900.

Over the weekend, we decided to take the plunge and upgrade the SSW TFS 2010 instance to the shiny…

Update: After a bit more work and discussions with other SSW guys, we've put together an updated version of…