This year, I've attended a lot of conferences. Most of the time I've been at a booth for Octopus Deploy, but often I've been there to speak. Before this year, I'd spoken at events all over Australia and in New Zealand, but 2016 was really my first foray into the international speaking circuit.

The highlights of my year so far have undoubtedly been the NDC Conferences. NDC conferences are huge and incredibly well organised events, and I'd often looked admiringly at the speakers who get a guernsey. It's quite humbling to be one of them, even though I've got a long way to go to consider myself an equal! 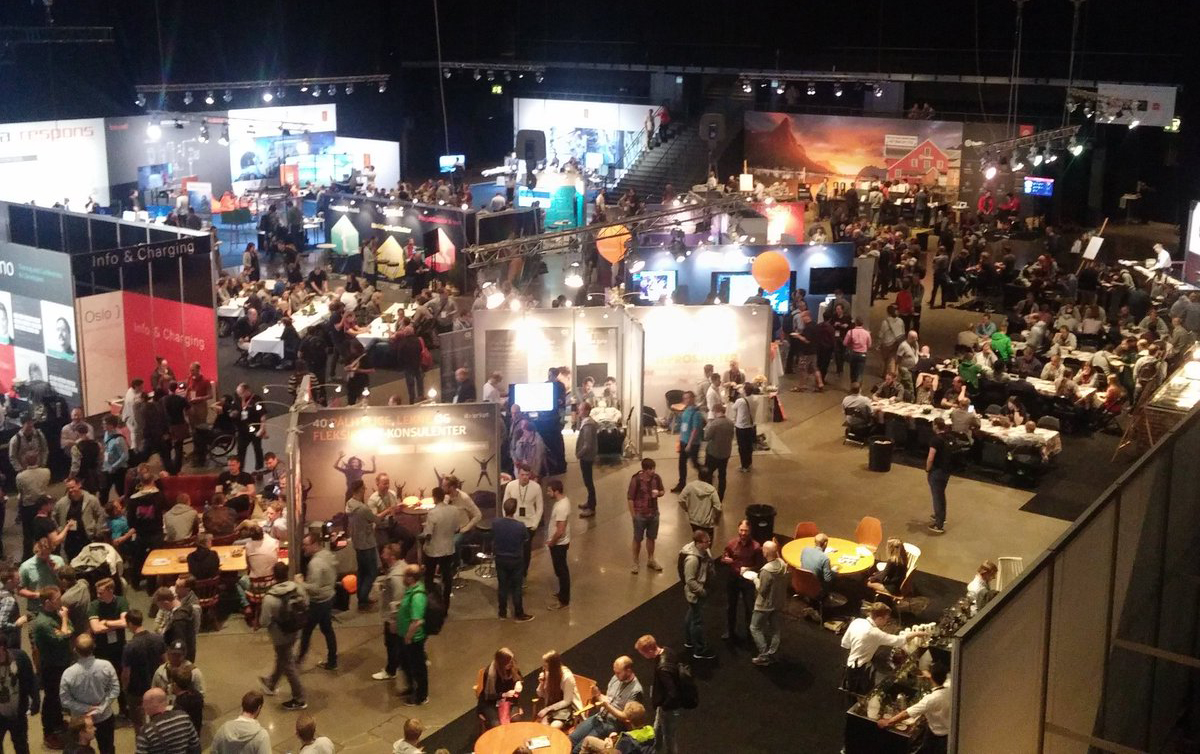 January kicked off with NDC London and I obviously performed well enough to be invited to speak at NDC Oslo in June. This year has also seen me do talks at the Kansas City Dev Conference, the Auckland .NET User Group, and the Auckland Azure Lunchtime Meetup as well as a few other events around the place. You can find recordings of many of them on my speaking page.

What works for me

I'm far from considering myself a professional speaker, but with the ramp-up of speaking gigs this year I've learned a few things about the way I work when preparing and delivering technical talks. Everyone's different, so these lessons may not apply to you, but they're things I've noticed about myself and the way I work.

I used to find it difficult to come up with ideas for a talk. More and more, I'm finding that if I pay attention to things I read and conversations I have, the talk comes to me instead.

#1: Write everything down in OneNote and let related ideas coalesce. 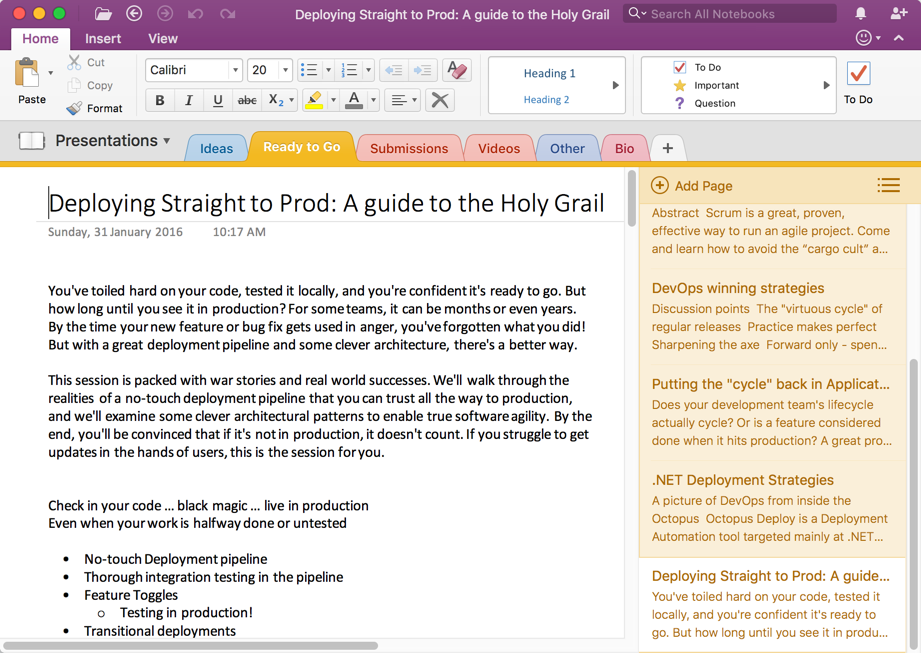 Coalesce seems to be the most accurate word for this (I spent some time on thesaurus.com). In short, every time I read something interesting, have a technical conversation, or solve a difficult problem, I think about whether it could one day turn into part of a talk, and if so I write it down. I'll revisit these notes frequently and think about them and expand on them. Before long, related topics start to come together and merge, and before you know it, there's an hour of material. A talk emerges.

You've no doubt heard this from every speaker, speaker coach, or person-on-the-street-with-an-opinion, but it's true. The only way to get good at something is to do it again and again.

I tend to do my practicing privately. Partly because I don't like delivering an unfinished talk to other people, and partly because it takes me some time to land on the best way to say something. Nobody wants to hear me ramble awkwardly. Importantly though, I practice out loud as if I'm talking to a room of people.

#2: Practice many times - out loud, as if you're doing it for real 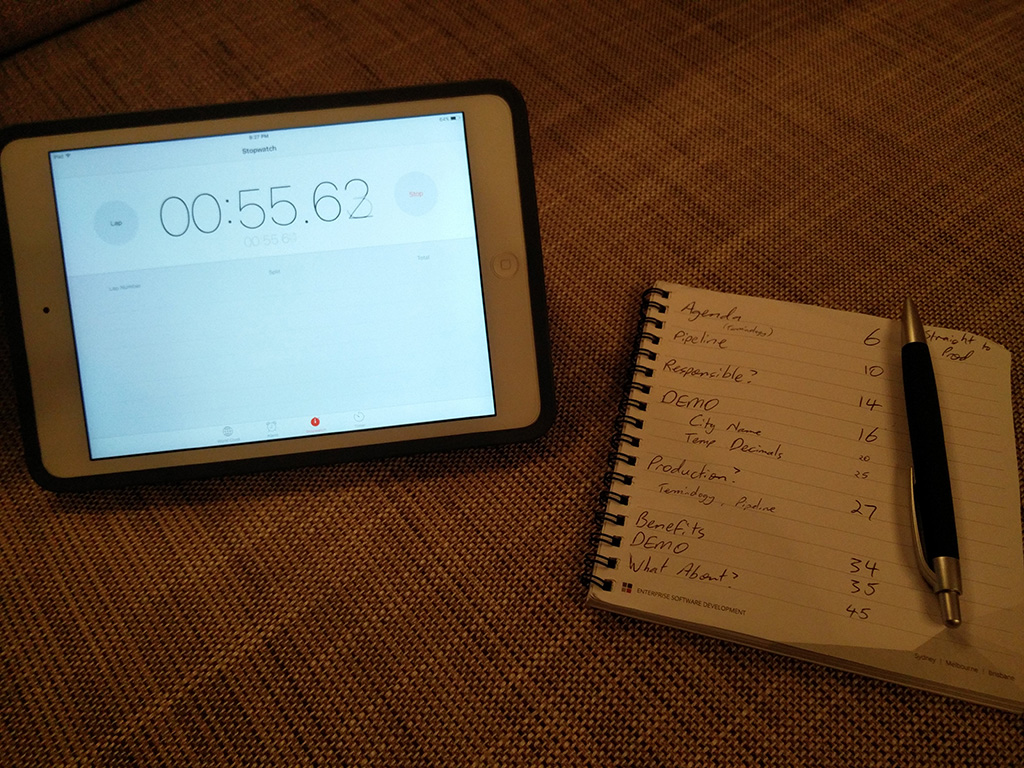 While practicing a talk, I'll go through a three main phases:

I'll run through each of these several times before moving onto the next, and each time I deliver the talk, I'll go back to phase 2.

Despite all this preparation, it often takes me a while to get totally comfortable with a talk. That used to bother me, but I now see it as part of the process. It's only when you're on stage that you learn that what worked well in the hotel room doesn't necessarily work in a room full of people. This applies especially to jokes.

#3: I'm not completely comfortable with a talk until I've delivered it at least 3 times. 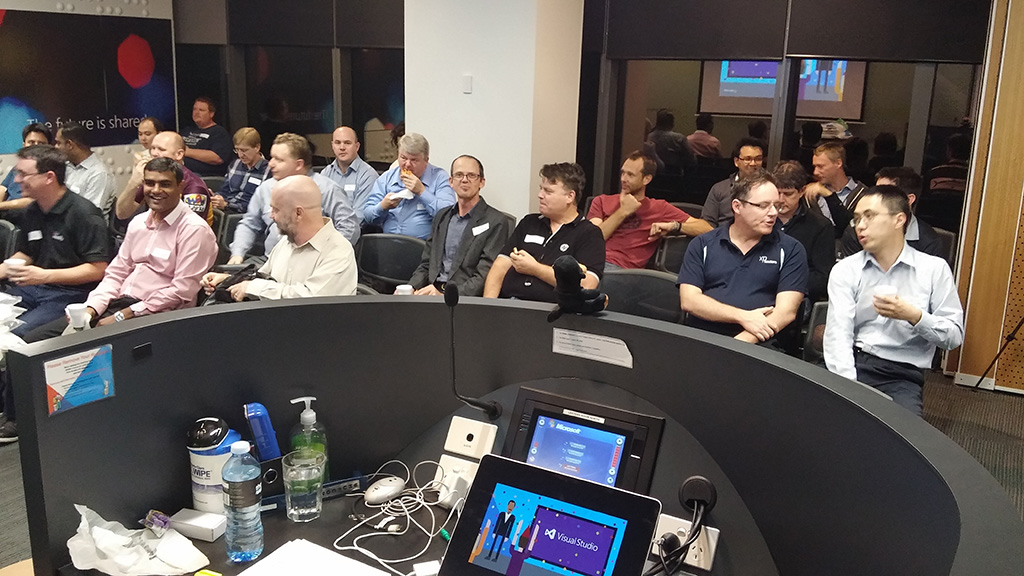 It's often good to deliver the talk for the first time at a smaller event. Your local User Group is a really good place to start, as is a brown-bag lunch presentation at your workplace.

Get it front of your mind

At NDC Oslo this year, I delivered two talks, then I did the same talks two weeks later at Kansas City Dev Conference. The first of my talks at KCDC was one I'd presented half a dozen times, so I didn't bother running through it again just before the talk - I figured by now I knew it back to front! But when I got up there, it sucked (in my opinion).

It wasn't that I didn't know the content, I did. It just wasn't forefront in my mind. It had only been 2 weeks since the last time I'd done it, but I'd forgotten the natural segues and the flow and the nice phrases to use. The whole thing felt messy and clunky. I resolved not to let that happen again.

#4: Always do a start to finish run-through just before you go on stage 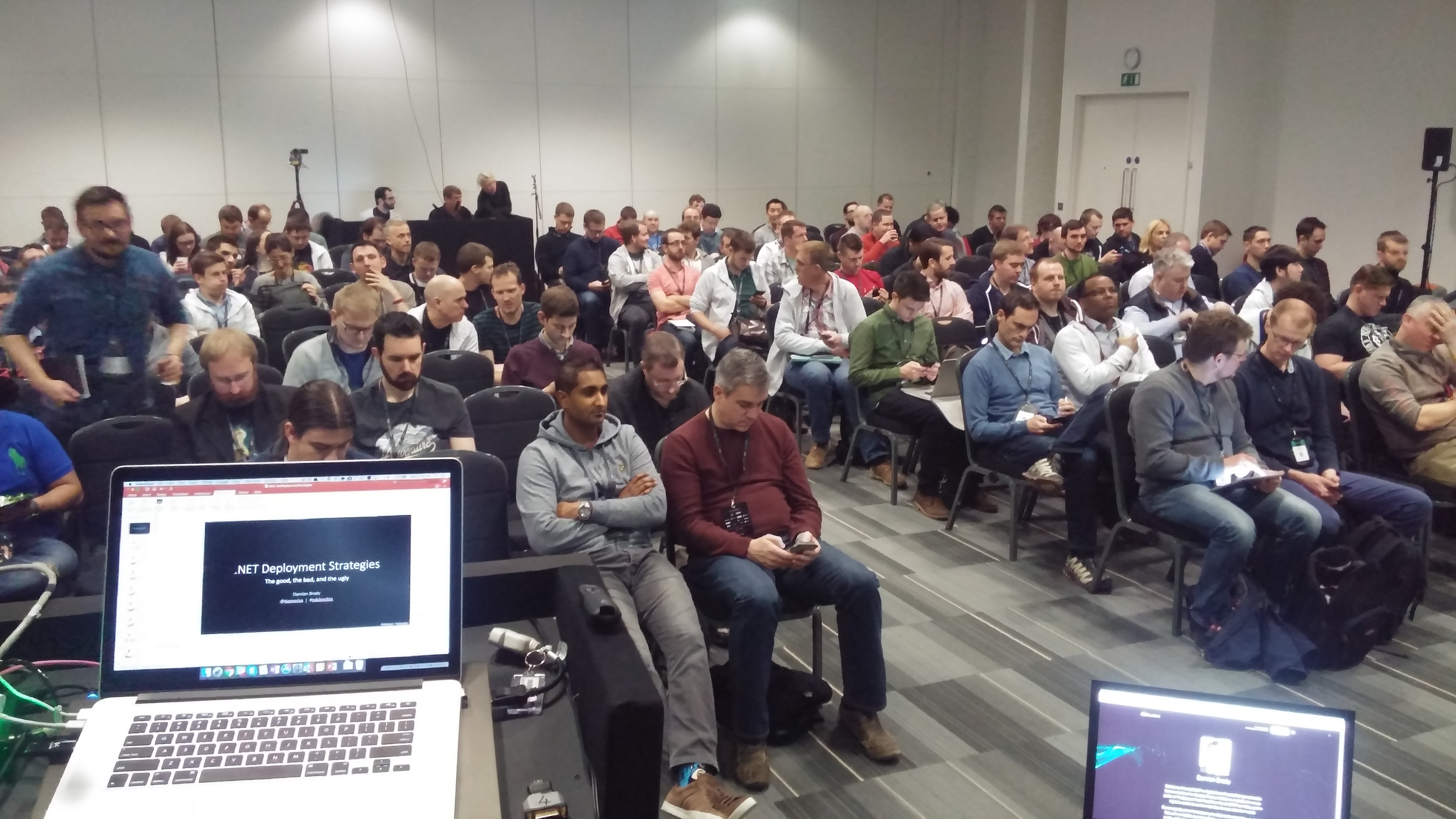 Be ready and focus on the start

I do a lot of prep beforehand, but even so, the first few seconds of speaking have the potential to throw me.

#5: Have everything you need ready to go, and focus on your first few seconds 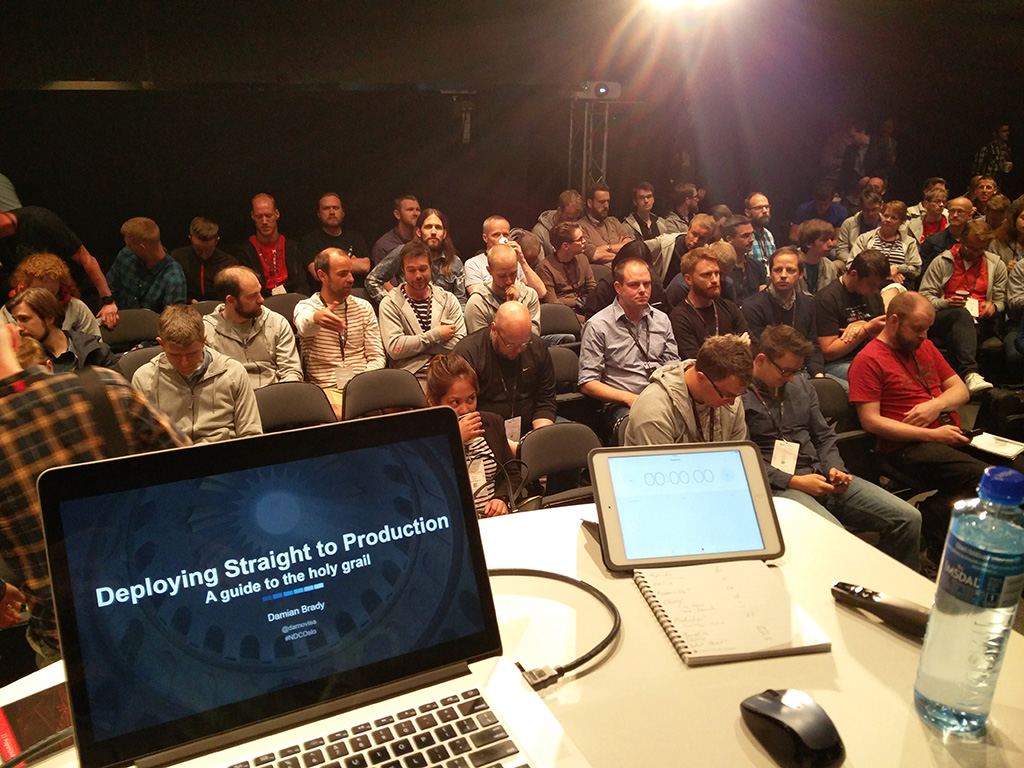 The photo above was taken just before I delivered my second talk at NDC Oslo. The room is actually quite wide, so you're probably seeing about 1/4 of the audience here. What you'll also see is the following:

What you don't see is me practicing the first few seconds of my introduction over and over in my head. When I start speaking, I need to know exactly what to say, and how to move into the first slide of real content. I know from personal experience that if I get stuck in those first few seconds, it'll throw me for the rest of the talk. Of course in this case, the first word out of my mouth was "Um", so it doesn't always go perfectly. :)

Make it easy to interact

The other thing you don't see in the previous photo is scheduled tweets. This was an idea I'd heard about from a couple of people, notably Troy Hunt, and Denise Jacobs.

#6: Schedule tweets that are timed to your slides and encourage people to retweet 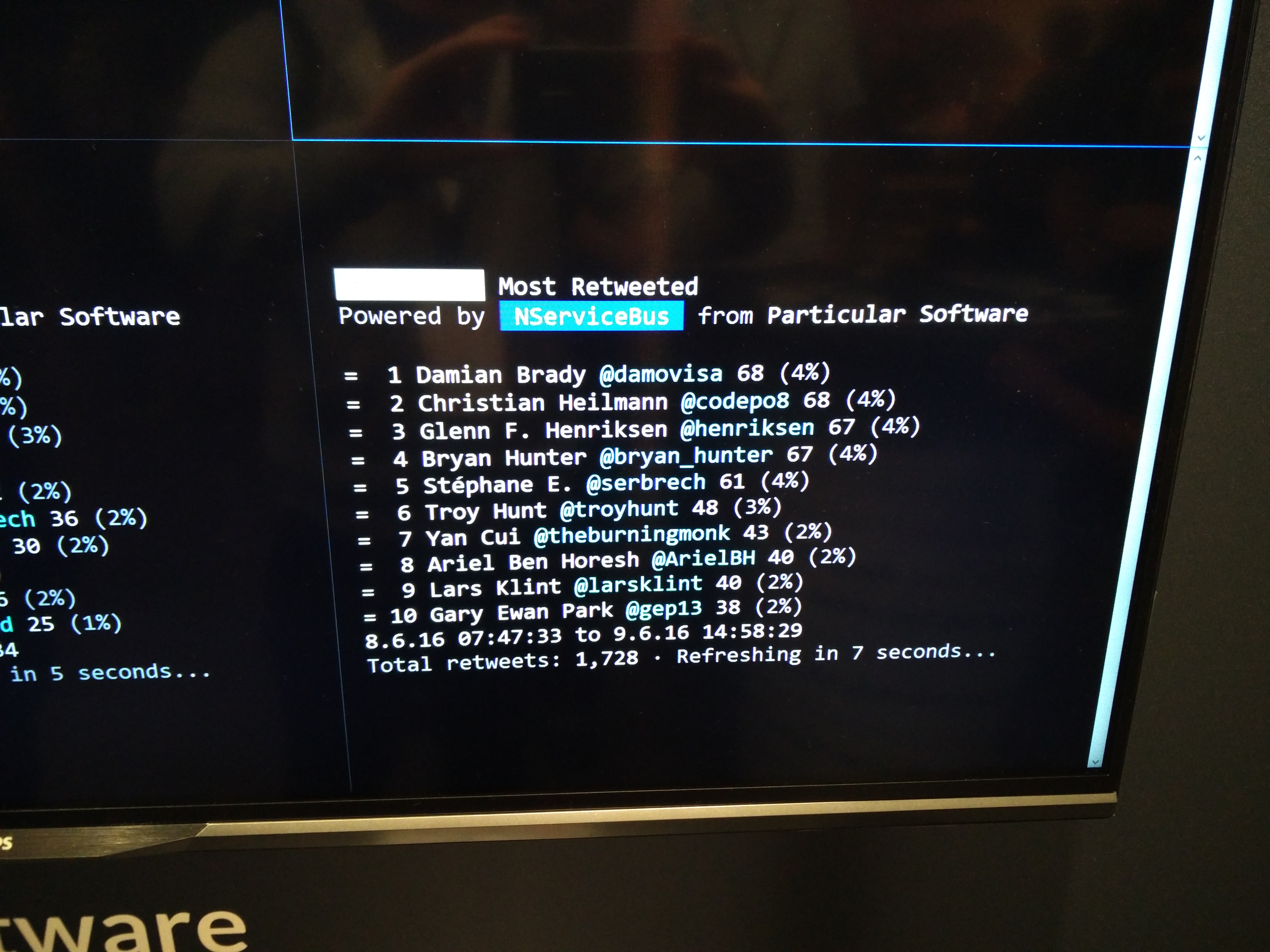 Because I've practiced and I know my timings, I know when I'm going to hit something that's (hopefully) tweetable. Rather than let others do it for me, I schedule tweets from my account with Tweetdeck so people can retweet them.

Planned but not scripted

This one is a personal preference that suits my style. I always know what I'm going to say with a fair amount of accuracy, but I'm never running from a script.

#7: Have a plan and even stock phrases, but never a script

This is another great advantage of practicing over and over again. During those practices, I'll have landed on certain phrases and sentences that sound good, and I'll make sure I repeat those each time. The same goes for segues between tricky slides - I'll know how to do those transitions. However for the most part, the actual words will be different every time. I have a plan, but not a script.

I'm really excited to be doing my third NDC event for the year in August - the first ever NDC Sydney! If you haven't been to one, do yourself a favour. This is one conference where they do everything right whether you're a speaker, an attendee, or a sponsor. There are still tickets available, so don't miss out.

On the Friday night of NDC, I'll be doing PubConf which should be a lot of fun, and a week later I'll be back at the always excellent DDD Melbourne.

Hopefully I'll see you at one of my talks soon!

The Bus Factor and Deploying to Production

Moving my blog to Ghost

Welcome to my new blog engine! I've recently been at a few conferences around the US and Europe (notably…