If you're just here for the absolutely-totally-not-supported agent,
you can download it here.

Us VSTS Microsofties like to talk about "Any Language, Any Platform". We do demos with .NET and Java and Node on Macs and Ubuntu machines, and deploy code to Azure and AWS and on-prem.

So when I saw this tweet from Edward Thomson, I was intrigued 🤔:

I ported the @VSTS build agent to Raspberry Pi - if you’re at #OSCON and interested in talking about cross-platform CI/CD drop by the Microsoft booth.

VSTS gives you a really easy way to install agents for Windows, macOS, Red Hat, and Ubuntu 14.04 and 16.04. Unfortunately, the Linux builds don't work on a Raspberry Pi. Probably not a surprise.

BUT, in typical recent-Microsoft style, the agents are open source! And they're written in C# for .NET Core!

So it should be totally possible to compile it for the Pi, right?

Well, yes, but there were a few changes needed.

Thankfully (for everyone), I didn't have to write any code, because Edward already did that for me. He had a pull request already in the works (don't be surprised if that link breaks soon), so I just grabbed that PR and compiled it on my Pi.

To compile, I needed to run two commands:

In fact, that second command is probably totally useless because I just unzipped it again.

But lo and behold, I had a zipped up agent, just like the ones VSTS gave me!

The agents you download from VSTS include a few things that this compiled agent doesn't have.

The first was the configuration and run scripts. I'd just compiled the pure, unadulterated agent. I imagine the scripts aren't totally necessary to run the agent, but I'm lazy. So...

I downloaded a Linux agent using the "Download agent" link in the Admin settings > Agent pools section of VSTS (https://your-account.visualstudio.com/_settings/agentpools) to pilfer those files and copy them to my new agent folder. 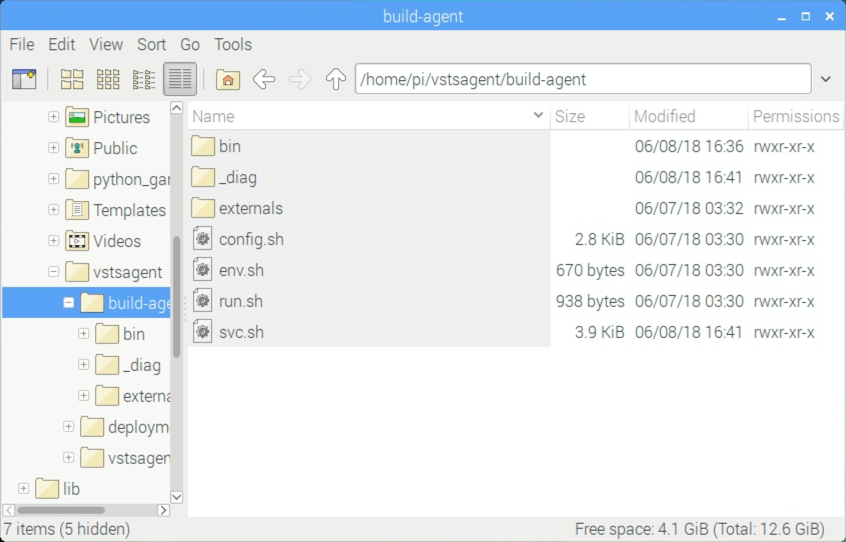 Now, I could run config.sh to configure and connect to VSTS, then run.sh to execute... and OMG the agent works! 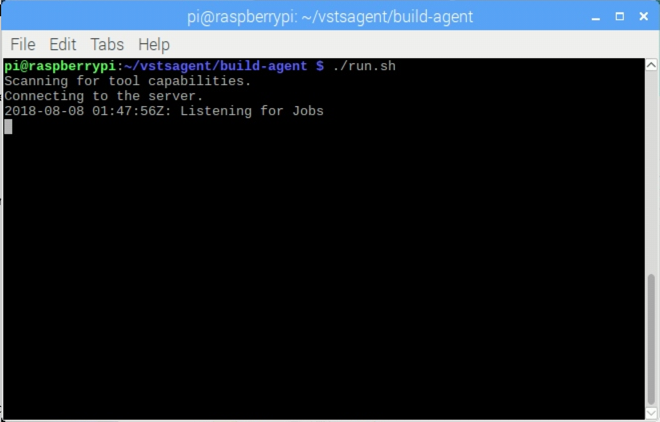 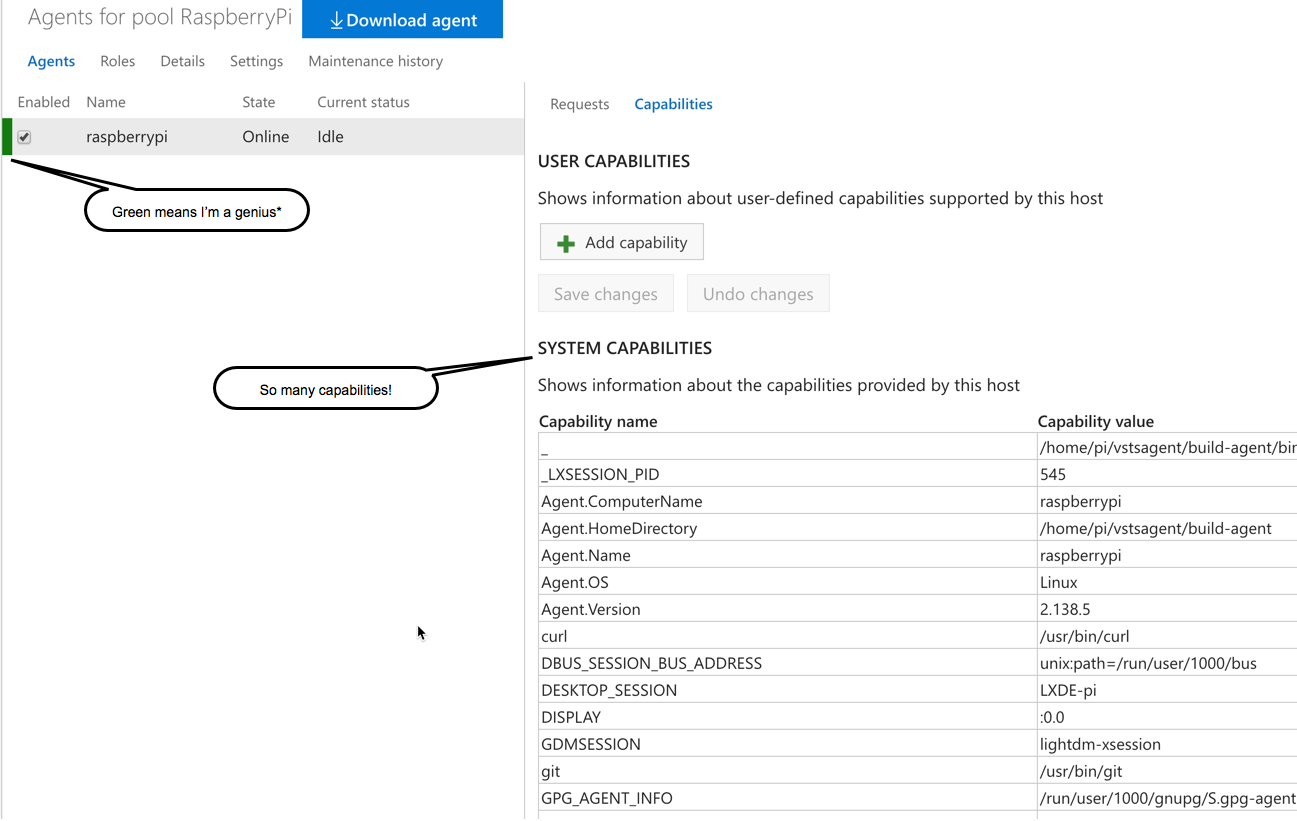 Did you know the exact same agent is used for builds, releases, and even targets in deployment groups?

I really just wanted to use the Pi as a machine to deploy to, so I reconfigured it as a target in a deployment group.

What's the difference between those three agent types? Here's my 2 second summary:

The separation isn't that black and white, but I'm getting off track, so ANYWAY...

I configured the agent as a deployment group target, ran it using run.sh again, and hooray, it connected! 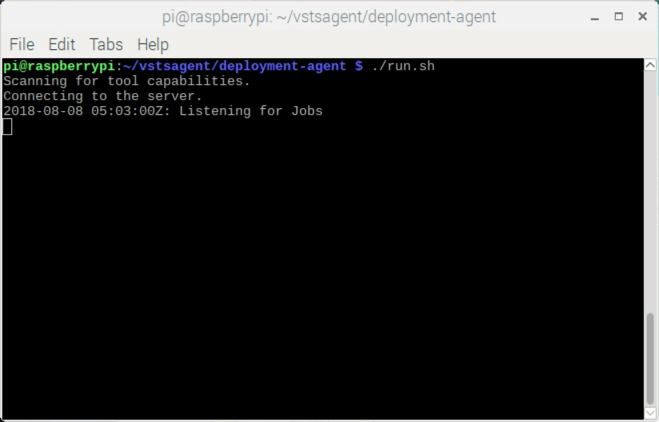 All that's left now is to create a basic release definition using the Deployment Group (the Bash script is just a hello world at this point), and run it!

And it didn't work!

Well it turns out all* the tasks run via node. Yep, even if I have a single bash script in my build or release, it runs that baby through node.

There's probably a good reason. I should look into that.

* I don't actually know if it's all of them, but bash and python definitely do

The second missing bit is a packaged version of node. Remember that externals folder? Turns out there's a known version of node in there that the tasks use to run.

Which poses a problem - the versions that come with the supported agents won't work (I tried). They're for other OSs...

So what did I do? I just found similar folders elsewhere on the Pi and naively copied them over!

For the record, here's what I copied:

Should I do this?

I mean, don't get me wrong, it's pretty cool being able to deploy directly to the Pi using an agent like this, but what if you have hundreds of devices, or you're actually deploying to 25 light globes or a refrigerator?

This works great for a Pi, but otherwise you're better served using Azure IoT Hub. That's what it's for after all.

So... off to research that!

Every year, DORA releases an awesome "State of DevOps" report based on tens of thousands of surveys responses. Here are my highlights.…

DevOps as a Department

Someone sent me a message the other day asking for some help. They'd recently joined a new company that was thinking of setting up a "DevOps Department". My immediate thought? That's a recipe for failure before they've even begun.…